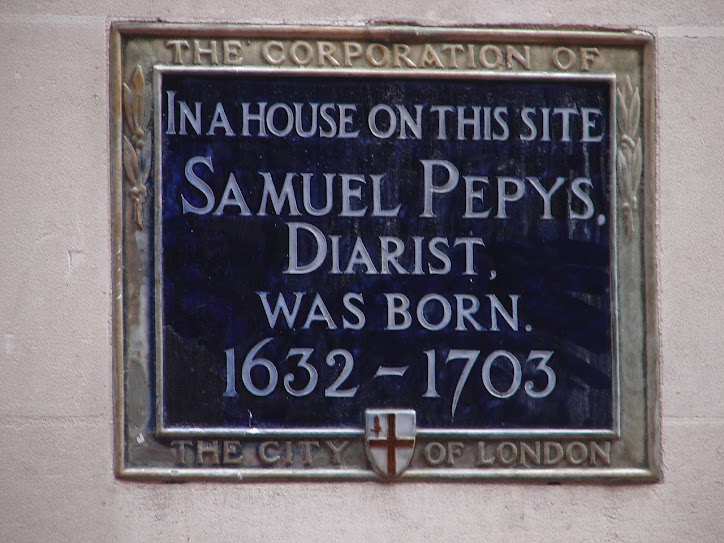 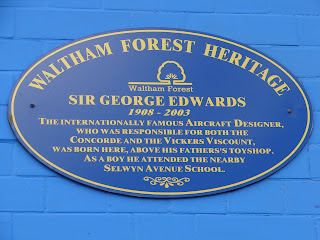 Within a stonesthrow of Vincent Richmond's plaque is one on the corner of Hales End Road, Chingford. It notes the place of birth of George Edwards, a pivotal figure in British aviation (and a rather more successful one than "Dope" Richmond.) He was described as “one of the world’s foremost aircraft designers and administrators - an architect of the age of flight”


The plaque notes that he was born above his fathers toy shop and I can't help but wonder if maybe he was inspired by the toy aircraft that he saw there. He like many learned his trade in the war years and they were skills that were badly needed. He became a senior designer draughtsman with Vickers in 1935 and worked on a special version of the Wellington, became Chief Designer in 1945 and Director and General Manager in 1953.

The post war years and the growth of commercial air travel provided opportunities especially when Britians farflung empire was still around. His designs were both civil and military. The Viscount, The Valiant (one of the cold war V bombers that were a part of Britain's "independent" nuclear deterrant), The VC10, The Jaguar and Tornado and of course Concorde. So his career also marks a change in the aviation industry, were once a single manufacturer would be responsible for the entire development and construction of an aircraft projects like the Tornado and Concorde mean unprecendented cooperation between not only businesses but countries.

I guess that thats true of a lot more than the aircraft industry. Huge conglomerates dominate markets, lobbying hard to get an edge on the opposition. Gone are the little names swallowed by Kraft or Nestle or Unilever...

Anyway that was my little visit to aeronautical Chingford. Hopefully well manage one more London trip before the madness of Yuletide is in full force...
Posted by fatboyron at 05:10 No comments: 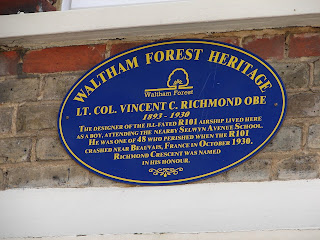 Yes, that really was the guys nickname. And not because he was a fan of the green either.

An age ago I went on a course at Cardington in Bedfordshire, the area is dominated by two vast structures. Built during the First World War to house the British airship programme that would rival the German Zeppelins, they were 700 feet long - and were enlarged after the war when the airship programme was developed to serve the need for communication throughout the empire on which the sun will never set...

It never really took off (pun intended) with the improvements in aeroplanes and also a series of high profile disasters the most famous of which is of course the Hindenburg explosion at Lakehurst NJ.

The R100 and R101 were rival designs, the R100 being buyilt by a commercial company and the R101 by the Air ministry with radically different agendas. The R101 had all the weaknesses of being designed by committee, it was alos subject to meddling from the Air Ministry and as the Air Ministry wanted a high public profile by press attention.

Richmond designed the outer covering of the airship where he used his revolutionary technique of stretching fabric over astructure and doping it which would cause it to shrink which while satisfactory for small aircraft was less than ideal for such a large craft.

Its unknown why the R101 crashed in Beauvais, France on 4th October 1930. The official board of inquiry found that there was a failiure of the outer cover of the upper nose which destroyed a gasbag, but with so many pressures of the court the conclusions are less than reliable.

Richmond was on board and was one of the 48 out of the 55 passengers who perished in the crash as did the dream of dirigibles...

Just one of the plaques spotted on a mammoth day of plaque spotting starting in Chingford and finishing after a long walk back from Oxford circus to Liverpool Street as Marie was on a course and I was at a loose end and unwilling to carry on with filling boxes on a lovely autumn day...
Posted by fatboyron at 14:44 No comments: I think i shan't be doing the old "it's like....in Nazi Germany" gibe for a while.


Our little trip to Berlin was quite the eye-opener. We stayed in a nice enough hotel on Auguststrasse just off Oranienbergerstrasse which was one of the major thoroughfairs of Jewish Berlin. We could see the elaborate dome of the Neue Synagogue from our room. It was within my lifetime in the Soviet sector of the divided city which means that there is only now a move to gentrify the streets. Theres a sharp contrast between the chic galleries and the mouldering ex-industrial buildings. And its the only European City that Ive experienced with vast tracts of rough ground within a walk of the centre.


Its a scarred city too, the pocked surface of many surfaces, whether is the plaster side of a building or the columns of the museums clustered on Museum Insel or the headstones in the cemeteries. Its scars are deep too and while life goes on, lets not forget that youd have to been in early old age now to be a witness to the deaththroes of the thousand year Reich and the soviet armies utter destruction of the city there is beginning of historical pespective appearing,reassessments of the cities dark past.


One of these is Solpersteine, small brass inlays dedicated to those who used to live within the walls behind the street. Tall, tidy houses for the most part - usually divided up into apartments. Sometimes singles sometimes small groups or three or four usually with the same surname placed at residenst request by a German artist Gunther Hemnig. Its the utter banality, the ordinariness of the sites, the familiarity of the places names - Auschwitz, Theriesenstadt, Riga. Lodz that gets you. The spectres of these families suitcased, hatted being "escorted" from their homes that lingers. The quiet suburban streets not so different now from then. We were situated just round the corner from Grosser Hamburger Strasse and the desecrated Jewish cemetary not to mention the empty house - a gap ripped into the row of houses , emblematic of the gap in German society with the names and occupations of the old tenements ex-occupants.
So far over 20,000 Stolpersteine have been placed with 2,00 in berlin...
Posted by fatboyron at 13:25 No comments: